Back to the Beginning

I didn't plan to walk away from posting for over four years.  I'm not even sure what has kept me away.  But here I am, starting over, going back to the beginning when I posted primarily as a convenient way to keep a garden journal.  Today, only photos, but I hope to grow this habit again with some notes and observations.

As a photographer of limited skill and talent, I know there are scenes in my garden that I'll never be able to fully capture with my camera.  And even the most skilled and talented photographers can't capture all of the elements - the scent, the sound, the feel of the air.  So why is it that when I encounter one of those scenes - one that stops me in my tracks, makes my heart beat fast, causes me to whisper an awe-filled "thank you" - my very next impulse is to go get the camera?

Surely I want to preserve the moment for myself - the photos, after all, will remind me of the smells and the sounds and the awe.  But it's more than that.  I know it's more because the next thing I want to do is show someone the photos I've taken.  I want to share the experience.

Is this universally true of gardeners - that we all want to share our gardens?
This time of year there is so much I want to share! 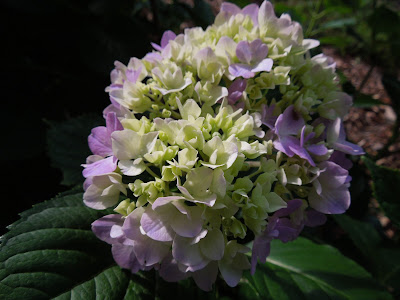 "Gardening, I told myself, is the  most sociable of hobbies.  The very nature of one's field of activities demands an audience.  No one wants flowers to blush unseen or waste their sweetness."
Barbara Cheney - The Atlantic Monthly, June 1936

"Every end is a beginning"

When you look at the year with a gardener's eye, where do you see the beginning?
Maybe winter, when you plan and dream for the season ahead?
Or are you like me, and view the beginning as the time those first green shoots and buds appear?

The beginning of this gardener's year was late.  A look back at photos has confirmed my
suspicion that the garden blooms have been appearing a week or more later than they did in 2012.
It's been such a cool Spring that many of the seeds I started didn't germinate. 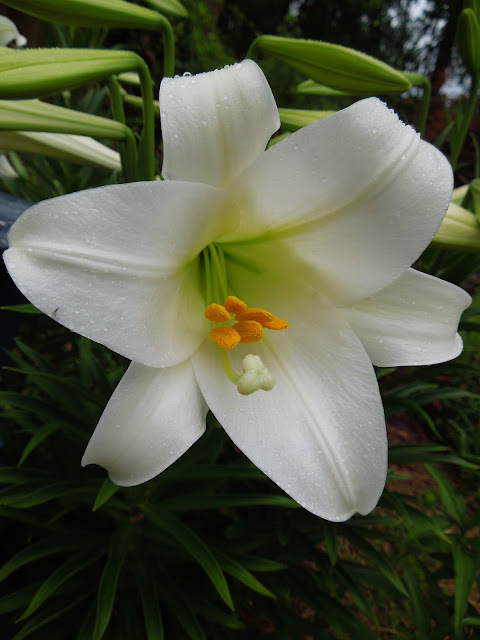 Today they're just beginning to bud.

The hydrangeas and daylilies that are just now budding were also blooming at this time last year.
Some of last year's blooms haven't returned at all.
The columbine, gaillardia, and coreopsis are gone, though I'm not sure why.
The impatiens that normally self-seed were stricken last August by downy mildew.


But this is the way of the garden, isn't it?  Always changing.  Plants die while seeds sprout.
The cycle of life continues.  While I mourn the loss of the columbine (that I started from seed), 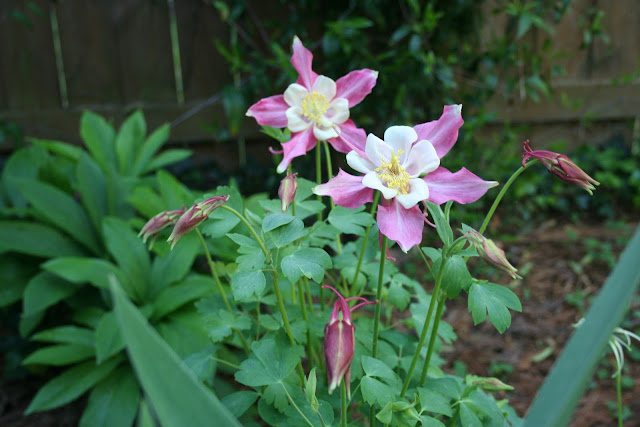 I rejoice at the first bloom on the daisies (that I also started from seed). 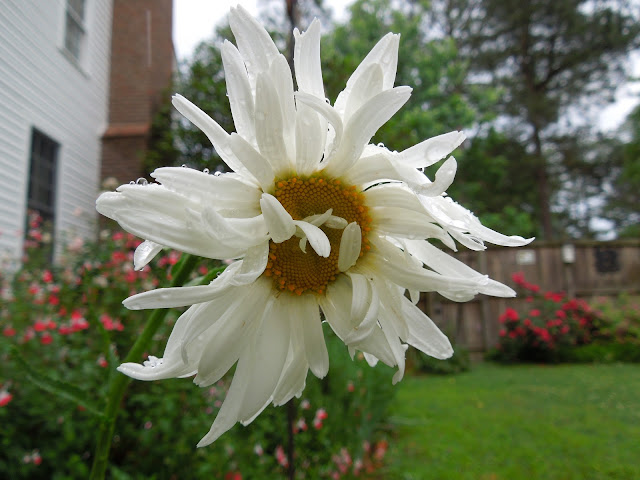 The garden is full of color despite the missing columbine.
The dianthus has an abundance of blooms and nothing can stop evening primrose. 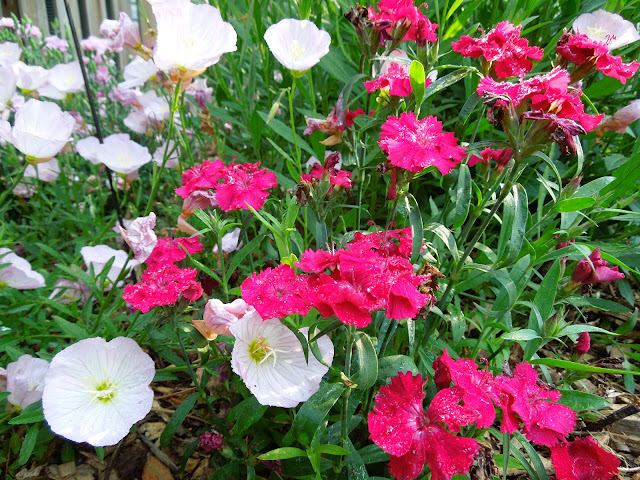 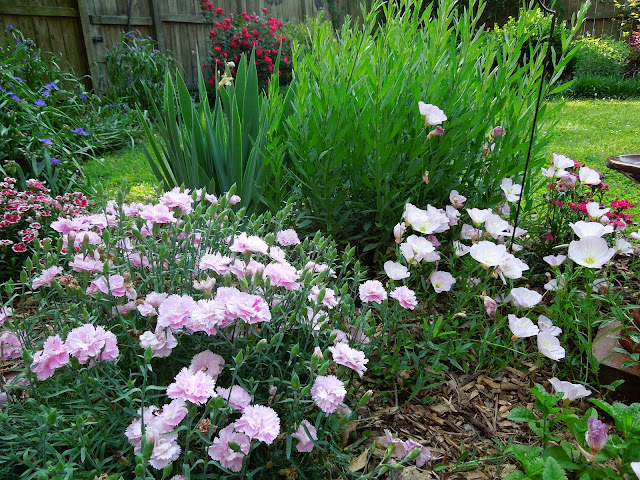 The bearded irises from my mother-in-law's garden have multiplied many times over
and put on a great show that has just now faded. 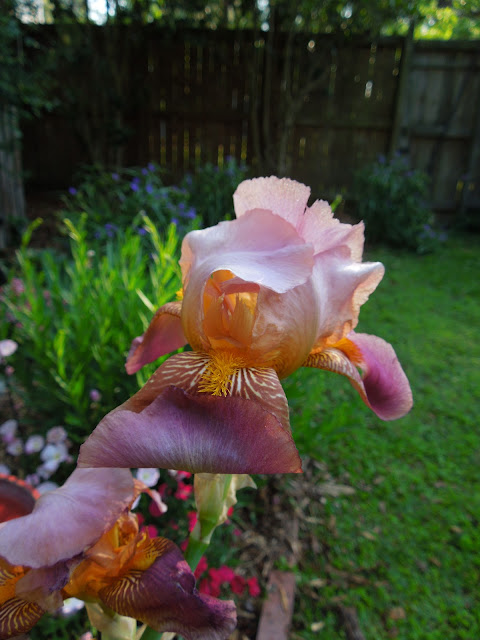 The Virginia spiderwort that I dug from my daughter's backyard continues to spread and
light up the garden with it's blue blooms. 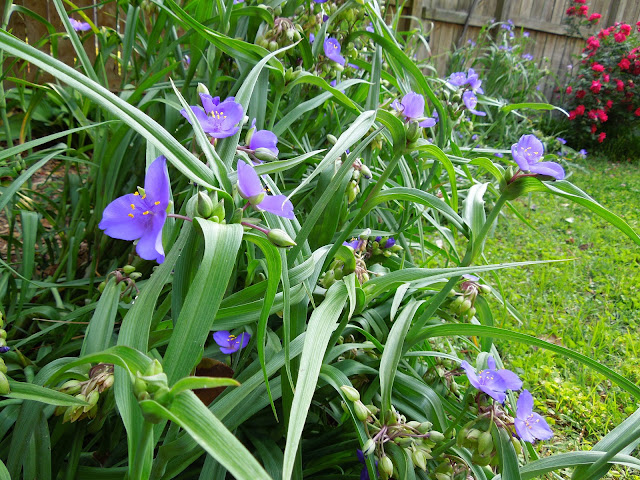 The pale pink blooms of the old-fashioned climbing rose, grown from a cutting rooted by my daughter-in-law, are as beautiful as ever.  (Read the story behind this rose here.) 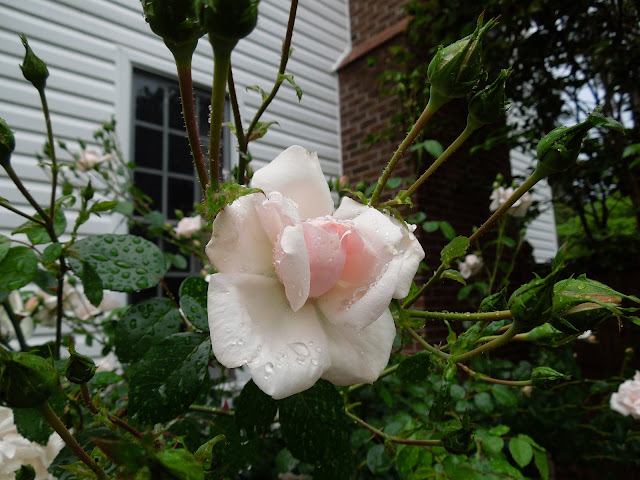 These three plants - the irises, spiderwort, and climbing rose - give me special joy, with their faithfulness and connection to family.

Earlier in May, the scent of the Mock Orange greeted me at the steps 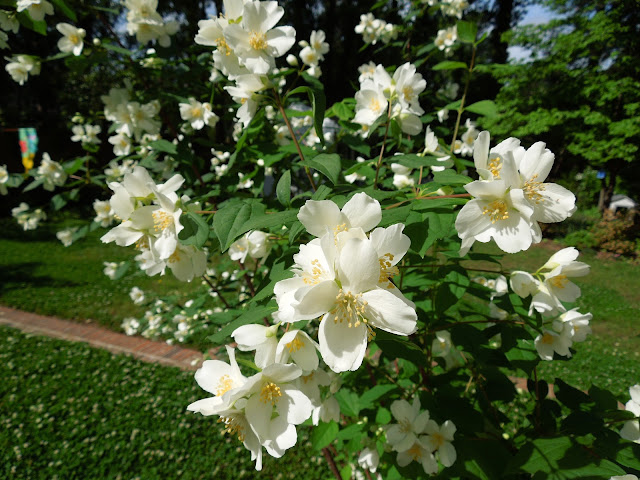 and the rhododendron blooms greeted me as I pulled into the driveway. 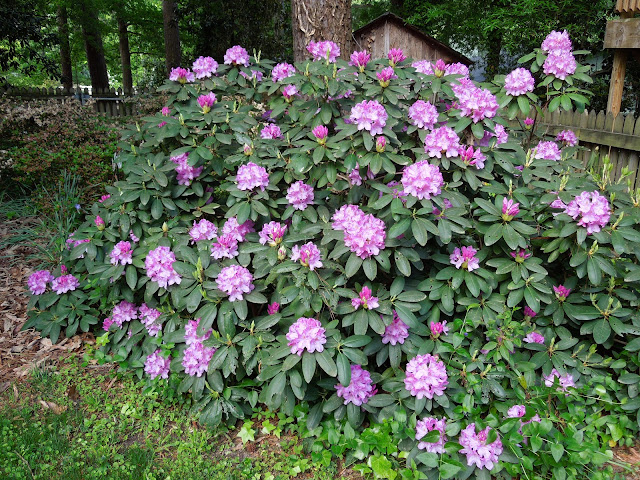 I look forward to the daylily, hydrangea, and Easter lily blooms,  followed by lantana, zinnia, and marigolds - the bright colors of summer.  I am thankful for the changing of the seasons and the gifts of each. And I am thankful, especially, for the reminder that "every end is a beginning."

"Our life is an apprenticeship to the truth that around every circle another can be drawn; that there is no end in nature, but every end is a beginning, and under every deep a lower deep opens."
- Ralph Waldo Emerson
Posted by Ginny at 4:57 PM 7 comments

The bold and the bashful 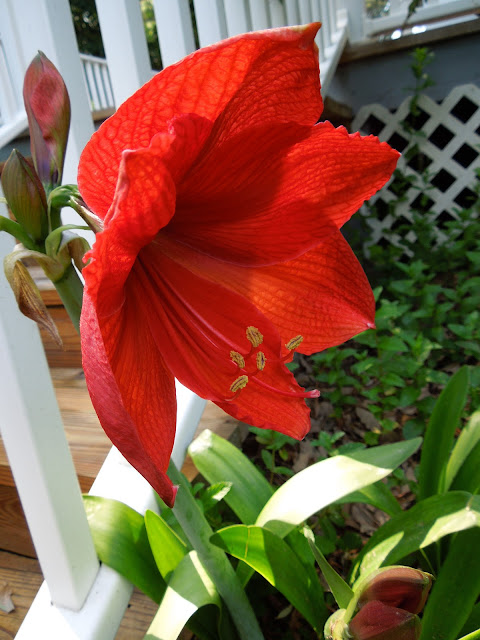 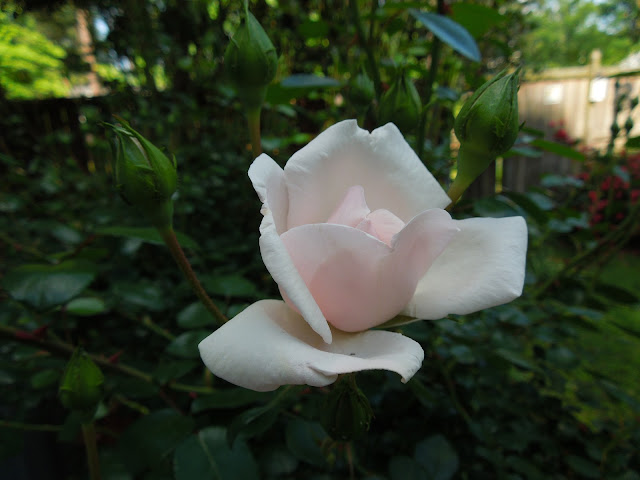 Flowers do have personalities, don't you think?
Posted by Ginny at 7:36 PM 5 comments

Ginny
Eastern North Carolina, United States
I have two blogs - Ginny's garden and The Blessing Bowl. In both blogs I share pictures and write about God's blessings. The Blessing Bowl is a place to record the small blessings of each day - to be reminded of the holy in the everyday. Ginny's Garden is an online garden journal, a place to record the blessings of nature. I'm a fledgling gardner. . . inexperienced and uneducated, but I find great joy in it. Gardening is so many things - a stress reliever, a lesson in patience, a humbling exercise - but most of all a reminder of the joy, wonder, and surprise in God's creation. "Connection with gardens, even small ones, even potted plants, can become windows to the inner life. The simple act of stopping and looking at the beauty around us can be prayer. " - Patricia R. Barrett, The Sacred Garden

Words to reflect upon 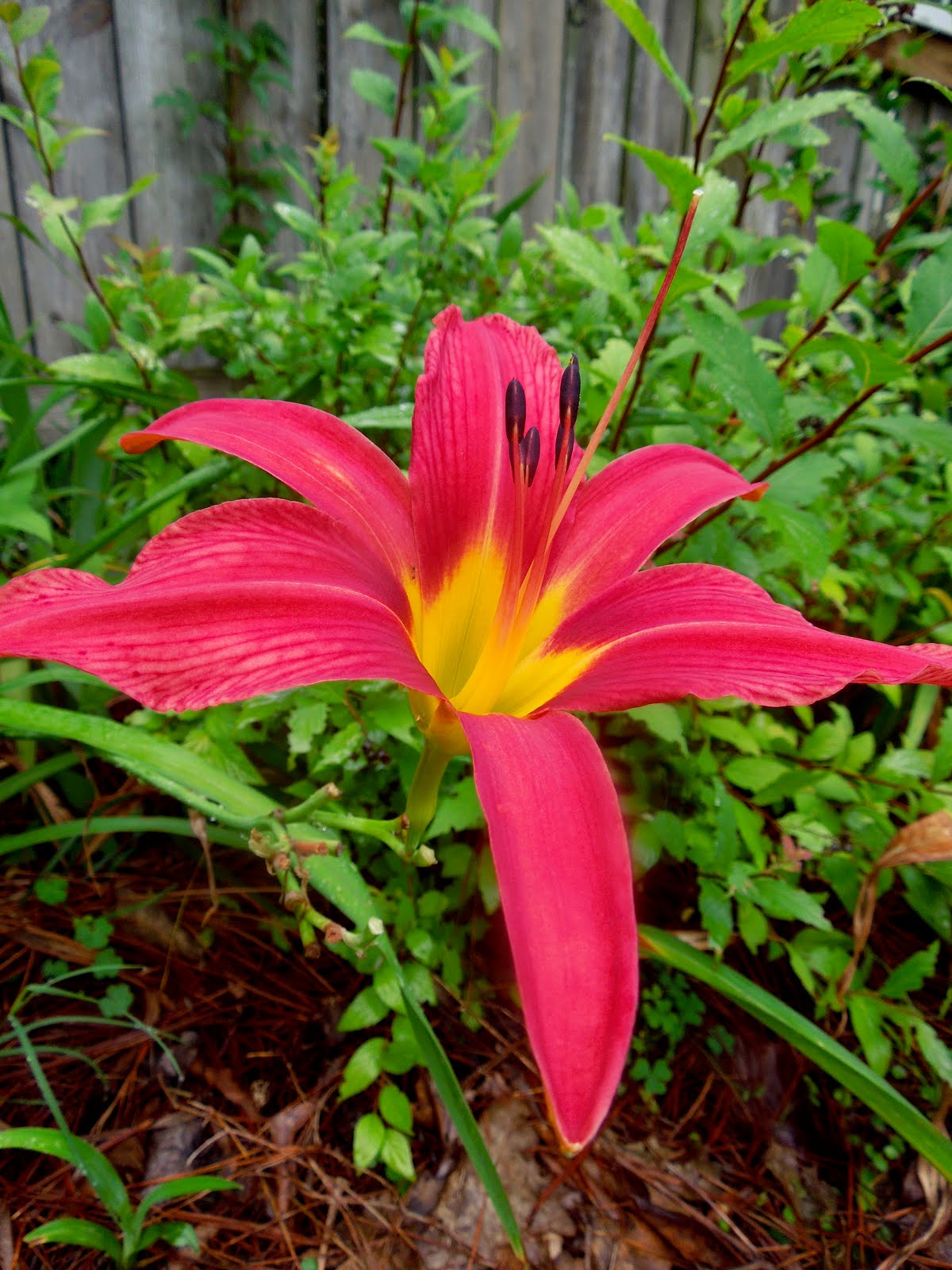